Kristin Deasy is a freelance writer from California based in Argentina

If you’re over 40 you may have been hearing the word perimenopause lately. It’s coming up for more and more women these days, and for good reason. Peri is a Greek word meaning “near” or “around,” making perimenopause the term for women’s transition to the menopause stage

We’re not talking about a transition of a few weeks here. We’re talking about a process that can last anywhere from four years to a decade, terminating with the onset of menopause. Menopause, in contrast, technically arrives in a single day – the day marking 12 months without menstruation for menopause-age women.

Peri-menopause symptoms are many and varied – no two women are alike – and studies indicate further symptomatic differences across ethnicities. The most common symptoms are night sweats and/or hot flashes, vaginal dryness, breast pain, interrupted sleep patterns, and mood changes. Less common symptoms include a burning sensation in the mouth, itchy skin, heart irregularities, and dizziness.

If that sounds like a lot, for many women, it is. 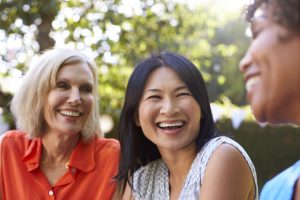 “Many of us experience some of these symptoms, but never put two and two together and realize it’s the menopause knocking on the door,” Aisling Grimley of the menopause support program My Second Spring says on her site. “I get a huge number of messages from second springers telling me that they thought they had a terminal disease or were going crazy or developing dementia. We need to chat about this a lot more.” It’s high time we de-mystified this completely natural and normal part of women’s health.

Apparently, menopause itself isn’t the problem. “It’s the period of time leading up to menopause that causes all the trouble,” Dr. Jennifer Payne, director of the Women’s Mood Disorders Center at Johns Hopkins University, told NPR.

The first thing to know: there’s no reliable test or diagnosis for perimenopause. The key sign is erratic and/or unusually heavy periods, perhaps with the addition of one or more of the symptoms outlined above.

Of course, the main cause of perimenopause is – you guessed it! – hormonal changes, as the body moves toward a lower estrogen level that will eventually curtail the menstrual cycle. The average age of menopause is 51, meaning most women will hit peri-menopause in their 40s, although it can start as early as the mid- to late-30s. It’s also a time when women begin to lose bone density at a higher rate due to a loss of estrogen and other factors so be sure to look into ways to prevent bone loss.

As for the hot flashes, anxiety, and insomnia many women experience as symptoms of perimenopause, many doctors will recommend low-dose hormone therapy or anti-depressants. For some women, a more holistic approach is preferred or necessary due to other health issues, are looking for a more holistic approach, here are five natural ways to help ease the transition:

Studies show that quieting the mind and opening to stillness both help lower stress and calm the nervous system. Not only will that help peri-menopause symptoms – it will increase your overall health and well-being. If you are preparing for perimenopause, finding your way to calmness is key. For some women, that’s trying a yoga class for the first time. Others might start exploring meditation. Others may take up Tai Chi. Find what works for you, and then let yourself fall into it. If you’re a to-do list person, don’t add this to your to-do list. Just invite yourself to check in with how you feel after you’ve carved out some time to prioritize stillness. Our bodies need it so desperately that before you know it, you’ll be craving your daily fix!

Diet is very important at this time due to the increased risk of heart disease and osteoporosis. Nourish your body with plenty of fruits and vegetables, nuts, fish, and whole grains; to the extent that you can, opt for food that is minimally processed and contaminant-free. According to the Mayo Clinic, there is evidence that caffeine and alcohol may contribute to hot flashes. Another study involving over 900 women found that daily intake of high-fat fish can potentially push menopause off by 3.3 years while increased consumption of beans delayed it for nearly a year, according to AARP, citing the Journal of Epidemiology and Community Health study. Refined rice and pasta, meanwhile, reportedly caused an earlier onset of menopause, as much as 1.5 years.

3) Work with a naturopathic doctor

Research on the effectiveness of plant therapy for perimenopause is inconclusive, but one thing is sure: don’t go at it alone. Medicinal plants can be powerful allies if used wisely. Misapplied, they can wreak havoc. Find a professional to help you discern which plants are best for your body and your symptoms. For example, a naturopathic doctor may recommend black cohosh, a popular herb for treating sleep issues and hot flashes, or other medicinal plants.

Cognitive-behavioral therapy and/or hypnosis has been found to ease hot flashes and help women sleep better. According to the North American Menopause Society, “a cognitive-behavioral therapy approach that combined relaxation techniques, sleep hygiene and learning to take positive, healthy approaches to menopause challenges was significantly effective in reducing women’s ratings of hot flash problems (although not their number).”

There seems to be growing evidence that acupuncture is a safe, viable method for treating some peri-menopause symptoms, particularly sleep irregularities and hot flashes. “Accumulating clinic data suggest that acupuncture is an effective and economical therapy for menopausal and perimenopausal syndrome,” concluded researchers in the journal Acupuncture Therapy for Neurological Diseases. More studies need to be done, but many women who have tried acupuncture for perimenopause and menopause symptoms report relief.

As always speak to your doctor if you are having symptoms that concern you. While this stage of women’s health is completely natural, there are times when night sweats and other symptoms may be related to other health issues.

Kristin Deasy is a freelance writer from California based in Argentina. She is passionate about nutrition and recently opened a restaurant oriented towards clean eating in Patagonia.

#LINKINBIO! Perimenopause can bring about some rea

#makeitpossible Are you frustrated and worried a